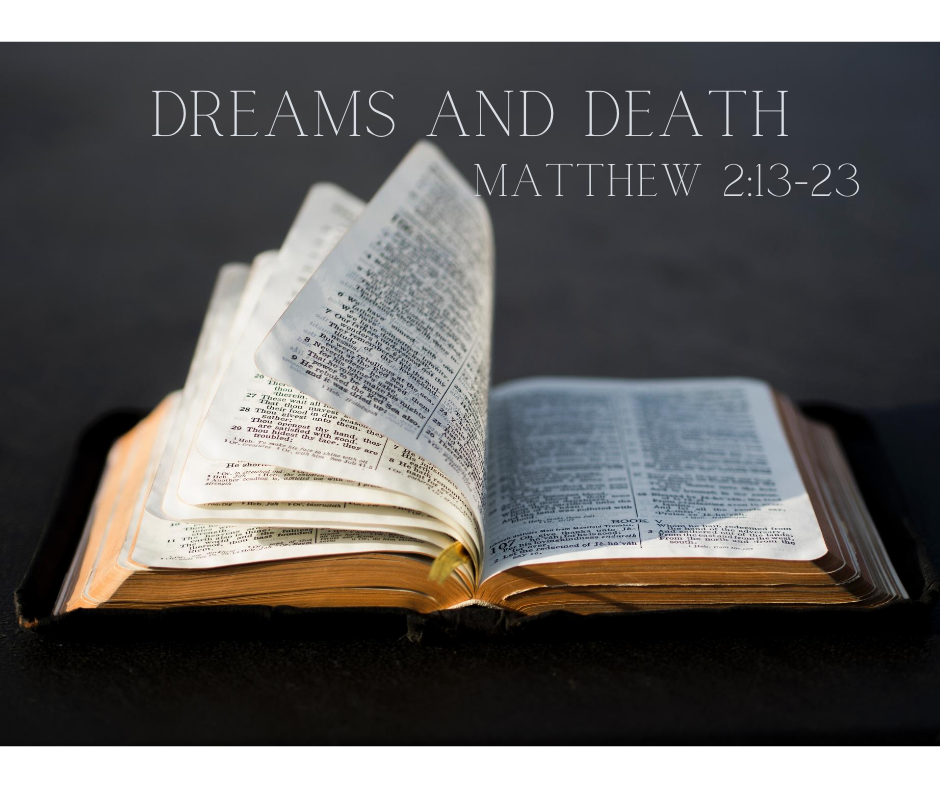 “Now when they had departed, behold, an angel of the Lord appeared to Joseph in a dream and said, “Rise, take the child and his mother, and flee to Egypt, and remain there until I tell you, for Herod is about to search for the child, to destroy him.” And he rose and took the child and his mother by night and departed to Egypt and remained there until the death of Herod. This was to fulfill what the Lord had spoken by the prophet, “Out of Egypt I called my son.” Then Herod, when he saw that he had been tricked by the wise men, became furious, and he sent and killed all the male children in Bethlehem and in all that region who were two years old or under, according to the time that he had ascertained from the wise men. Then was fulfilled what was spoken by the prophet Jeremiah: “A voice was heard in Ramah, weeping and loud lamentation, Rachel weeping for her children; she refused t be comforted, because they are no more.” But when Herod died, behold, an angel of the Lord appeard in a dream to Joseph in Egypt, saying, “Rise, take the child and his mother and go to the land of Israel, for those who sought the child’s life are dead.” And he rose and took the child and his mother and went to the land of Israel. But when he heard that Archelaus was reigning over Judea in place of his fater Herod, he was afraid to go there, and being warned in a dream he withdrew to the district of Galilee. And he went and lived in a city called Nazareth, so that what was spoken by the prophets might be fulfilled, that he would be called a Nazarene.”

God used dreams to keep Joseph, Mary and Jesus safe. God uses many things to keep us safe also. One of those is His written Word. The Bible is full of instructions to keep us safe and secure on this earth. He created this world and knows everything about it. He knows what will harm us and wants us to be safe.

God sent his own son, Jesus, to redeem us from the ultimate enemy which is death. Jesus died in our place so that we can have eternal life. God loves us so much! John 3:16

Another help for us is The Helper, The Holy Spirit. God sent his Spirit to live in us and give us understanding and wisdom. God does not leave us helpless. When we trust Jesus as our Lord and Savior we receive the Holy Spirit as a guarantee of God’s ownership over us.

Herod ignored all of these gifts from God and refused to let God help him. So, God turned Herod over to himself and “Herod died”. What a sad ending to a life that could have been so different. Instead it ended in death, the very thing that he wanted to do to Jesus.

So what about me? Will I trust God to take care of me and love Him? Will I take the gifts of His Son, His Word and His Holy Spirit and thrive in this life?

Prayer: Father thank you for giving me such good gifts and demonstrating your love for me. Help me to use what You have given me and depend on You today to give me grace as I walk through my day. Amen