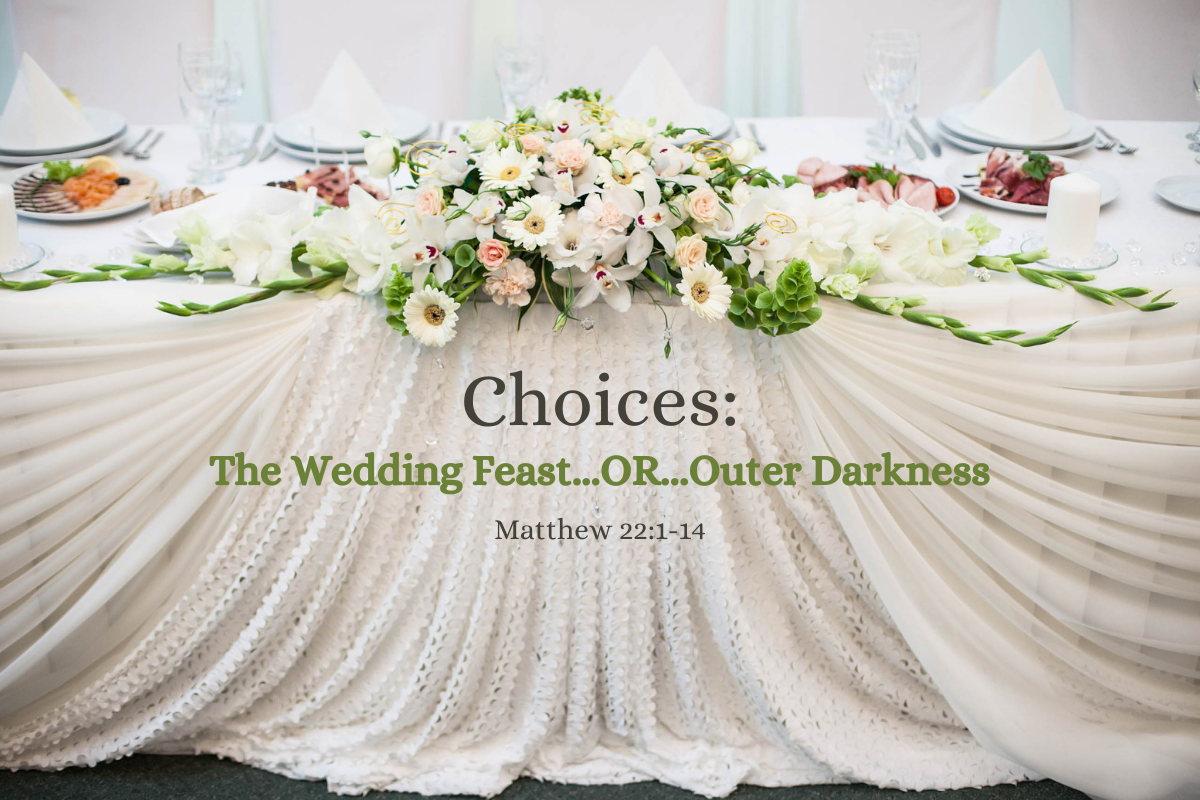 “And again Jesus spoke to them in parables, saying, “The kingdom of heaven may be compared to a king who gave a wedding feast for his son, and sent his servants to call those who were invited to the wedding feast, but they would not come. Again he sent other servants, saying, ‘Tell those who are invited, “See, I have prepared my dinner, my oxen and my fat calves have been slaughtered, and everything is ready. Come to the wedding feast.'” But they paid no attention and went off, one to his farm, another to his business, while the rest seized his servants, treated them shamefully, and killed them. The king was angry, and he sent his troops and destroyed those murderers and burned their city. Then he said to his servants, ‘The wedding feast is ready, but those invited were not worthy. Go therefore to the main roads and invite to the wedding feast as many as you find.’ And those servants went out into the roads and gathered all whom they found, both bad and good. So the wedding hall was filled with guests. “But when the king came in to look at the guests, he saw there a man who had no wedding garment. And he said to him, ‘Friend, how did you get in here without a wedding garment?’ And he was speechless. Then the king said to the attendants, ‘Bind him hand and foot and cast him into the outer darkenss. In that place there will be weeping and gnashing of teeth.’ For many are called, but few are chosen.”

A wedding feast or outer darkness. Which do I choose? I will take the wedding feast thank you! To eat and drink with my King Jesus, thank you very much.

Those who would not come: This is a matter of rebellion, stubbornness and choice, and choices have consequences. Instead of enjoying a feast with the King they lost everything. They paid no attention because they were doing their own thing. This is what happens to those who follow their heart and the world. They get thrown into outer darkness.

Which will we choose? Who will we follow today? Jesus or our own hearts? Choose Jesus and enjoy the feast that he has prepared for us with all the good things which a good King gives to those he loves.

Prayer: Thank you Lord God for inviting me to Your wedding feast and giving life to this dead body so I could respond to the invitation with a resounding yes! I look forward to feasting with You, Jesus, listening to Your every word and enjoying You forever both physically and spiritually. Come Lord Jesus, Come. Amen